January 2016 – January is the month when Mainers get out and celebrate the season at one of the state’s winter fairs and festivals. It’s when savvy locals and visitors bundle up and head into the Maine woods to explore the landscape on snowmobiles. For anyone looking for a little rest and relaxation, it’s […] 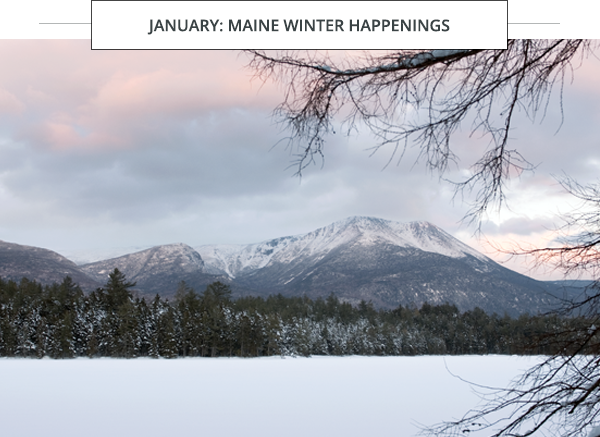 January 2016 – January is the month when Mainers get out and celebrate the season at one of the state’s winter fairs and festivals. It’s when savvy locals and visitors bundle up and head into the Maine woods to explore the landscape on snowmobiles. For anyone looking for a little rest and relaxation, it’s when classic Maine inns offer an even cozier welcome to visitors. This is also the time of year to mark calendars for the state’s growing number of film festivals, most of which offer a showcase for the work of independent filmmakers. For writers, editors and bloggers looking for short-lead news, you’ll find immediate details under Happening Now. Those in search of longer lead news, scroll down to the Looking Ahead section. 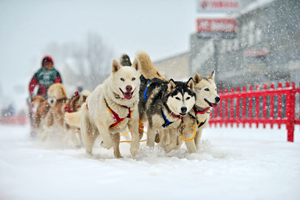 Maine embraces the winter season with carnivals, fairs and celebrations. From January 30 to February 7, 2016, Camden hosts the annual Winterfest, with snow sculptures and ice carving contests, as well as the U.S. National Toboggan Championships.

A polar plunge and freestyle skiing competitions are also part of the festivities. The Maine Lakes Winter Carnival in Bridgton, an hour’s drive from Portland, offers dogsled and snowmobile rides and the “Freezin’ for a Reason” polar dip into Highland Lake on February 20.

On the coast, the OOB Winter Carnival in Old Orchard Beach runs from February 18 to 20, with winter sledding down the middle of Old Orchard Street, a Kids Carnival, night sledding and ice bowling. Up in Rangeley Lakes, the snowmobile club’s annual Snodeo from January 21 to 23 offers scenic helicopter flights, a chowder cook-off and plenty of snowmobile rides. For those who’d rather celebrate winter indoors, the Flavors of Freeport in downtown Freeport is a great way to taste the best of the Maine coast, with food events ranging from chocolate factory tours to a cocktail competition and a lobster brunch. 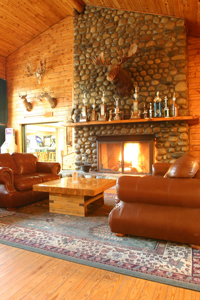 A host of Maine inns and resorts offer a warm winter welcome and it’s possible to plan a weekend away or even a weeklong itinerary sampling their hospitality along the way. Start with The Danforth Inn adjacent to Portland’s Arts District. This boutique property offers stylish and comfortable bedrooms, roaring fireplaces and the Southeast Asian cuisine of the chic Tempo Dulu restaurant.

Among the Lakes Bed and Breakfast is in the Belgrade Lakes region, not far from Colby College. At this 250-acre family property, a winter’s day is best spent with a good book in the Parlor Library or heading out on the Nordic ski and snowshoe trails that lead from the house’s back door.

Dedicated pampering is the rule at the legendary White Barn Inn in Kennebunk, where the treatments at the Spa and dinner at The White Barn Inn Restaurant can elevate a stay from a mere getaway to a romantic weekend. For those who’ve been to Acadia National Park in summer but not winter, The Maples Inn in Bar Harbor offers cozy accommodations, stuffed blueberry French toast and a great base for exploring the park by cross country skis or snowshoes in the off season. More inns can be found at Visit Maine. 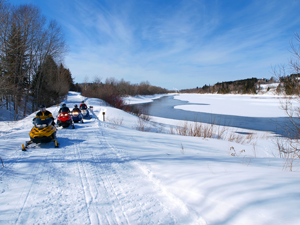 Maine offers some of the best snowmobiling terrain east of the Rockies, with vast stretches of uninhabited wilderness and more than 14,000 miles of marked snowmobile trails, many of them cared for by the state’s 280 snowmobile clubs. This winter, East Coast Snocross (ECS) has established an event designed to bring trail riders and race fans together.

The inaugural Maine North Woods Sno-X Challenge is scheduled for Saturday and Sunday, March 12-13, at Historic Pittston Farm in Rockwood. Officials say it’s the first event of its kind where 90 percent of the spectators are expected to arrive by snowmobile. Two days of high-flying action are promised. The Polar Blast in Eustis/Stratton, from February 4 to 6, is a get-together that features races, as well as a host of family activities, including fireworks and ice skating. At Bald Mountain Camps in Oquossoc in the Rangeley Lakes area, February 13 will see the 3rd attempt at the world’s largest snowmobile group ride, which will benefit the Cystic Fibrosis Foundation, at Bald Mountain Camps. All of these events are sanctioned by the Maine Snowmobile Association.

Lobsters may get the limelight in Maine’s culinary pantheon, but lowly seaweed has come to be seen as an important part of the state’s contribution to gastronomy. The New Yorker just reported that “seaweed could be a miracle food” and Well+Good reported that “Suddenly, everyone is talking about the not-so-sexy underwater plant for its nutrient profile, skin-care benefits, and incredible potential for combatting climate change.”

Maine is now the nation’s No. 1 seaweed source and the state has more than 20 companies that grow or collect seaweed. Quite a bit of seaweed, in fact. Harvesters in the state collected 17.7 million pounds of seaweed in 2014. While some is used for industrial purposes, seaweed like Irish moss is used in beer brewing and sugar kelp can be a pasta substitute. You know that seaweed’s arrived when there’s a Maine Seaweed Festival, now heading into its third year. Last August, it drew more than 3,000 seaweed devotees to South Portland. For more on Maine’s “sea to table” movement, go to Visit Maine.

Maine has a growing and vital roster of film festivals all across the state and in all seasons. The Maine Jewish Film Festival is held every March in Portland and has become one of the best-attended and most highly anticipated cultural events in the area. The Emerge Film Festival is held every April in Lewiston/Auburn, with the aims of building awareness of independent films and supporting a diverse cross-section of filmmakers.

Each July for nearly 20 years, the Maine International Film Festival has brought independent and international films to Waterville, with more than 100 films shown each year. The 48 Hour Film Project is held in Portland every July, which requires filmmakers to write, shoot, edit and score movies in just 48 hours. In September, cinema buffs head to the Camden International Film Festival, which is now recognized as one of the top 25 international documentary festivals in the world and one of the 12 best small town film festivals in the US. Learn more at Visit Maine.